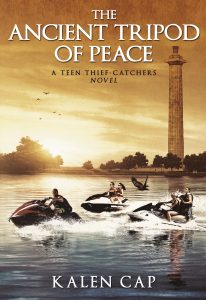 For over two thousand years the Enlightened Pythagoreans have been at odds with two other Pythagorean sects. But when artifacts are stolen from a museum, a pair of teens find themselves embroiled in the theft of an instrument of astounding power and ancient secret societies trying to prevent it from falling into the wrong hands.

Lexi Evans has always thought of her family as ordinary, though she likes their interest in history. Even though she’s been plagued by feelings of loneliness lately, she’s excited to start at Ohio Archipelago Regional High School, a charter school with an unusual curriculum. She soon finds herself grouped with the dreamy Trevor for a big assignment, but she’s wary of the group’s third member, Gil. And why do her teachers have such a weird dislike for her? Then, Lexi learns her dad’s job as manager of a museum of antiquities is in jeopardy when ancient artifacts go missing.

Gil Hollister used to have it all until his father was incarcerated and ruined the family finances. Interested in codes and ciphers, and adept at computers, Gil has little patience for ditzy kids and, at first, believes Lexi is one. But when he discovers a secret code within a Shakespearean play as part of a class project, the group of friends find themselves up against forces they never imagined.

Soon, more family secrets are revealed as mysterious secret societies race for a powerful relic, the Tripod of Peace. And what does a weekend party back in 1971 and past lives readings have to do with it all? What does a golden eagle named Potenuse have to do with it now? Lexi and Gil must work together if they want to solve the theft. But what chance does a group of young thief-catchers have against such foes?

Buy The Ancient Tripod of Peace on Amazon

Columbus and Port Clinton residences. Set among the Lake Erie Islands, “The Ancient Tripod of Peace” is his second novel, first of the Teen Thief-Catcher series. His first novel, “Tangled Ties to a Manatee,” was published in 2012.