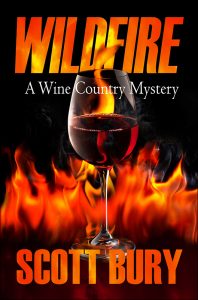 Wildfires swept across California wine country in 2017, destroying thousands of homes and businesses and killing dozens of people. Law school grad and single mother Tara Rezeck finds herself in the middle of the catastrophe. She has to evacuate with the rest of of the staff of Sonoma’s most award-winning winery. When she returns, she finds her employer’s body in the ashes.

The question that challenges her brains and her legal training is: was it an accident? Or was his body burned to hide evidence of murder?

**Scott Bury will be signing books in Ottawa on Jul 6 if you would like to join!**

After a 20-year career in journalism, he turned to writing fiction. “Sam, the Strawb Part,” a children’s story, came out in 2011, with all the proceeds going to an autism charity. Next was a paranormal short story for grown-ups, “Dark Clouds.”

The Eastern Front trilogy tells the true story of Maurice Bury, a Canadian drafted into the USSR’s Red Army to face the German invasion of the Soviet Union. Army of Worn Soles, the first volume, was published in 2014, followed by Under the Nazi Heel in 2016 and Walking Out of War in 2017.

His latest work is Wildfire, the first in a projected Wine Country Mystery series. Later this year, he will release four books in the Hawai’ian Storm mystery series.