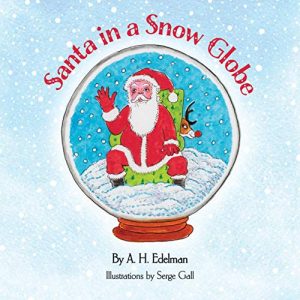 Santa in a Snow Globe by A.H. Edelman:    Why is Santa sitting behind a clear protective barrier?

How can parents explain to children that, even though some things will be different this year, Christmas magic remains the same?

Let Santa do it! Santa in a Snow Globe is the origin story of how and why St. Nick will be found sitting “in a place that is clear and quite round” when families come to share their wish lists this holiday.

AH Edelman is the author of The Little Black Dress and Manless in Montclair. And, yes, she still believes in Santa.

Serge Srecko Gall, originally from Zagreb, Croatia, is a painter and illustrator whose work has appeared in publications including The New York Times, Esquire, and The New Yorker. He lives in Hillsdale, NY and is currently working on his autobiographical graphic novel.