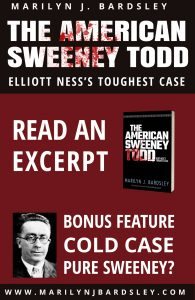 Blurb: In this action-packed novel you will meet the brilliant, highly educated American version of Sweeney Todd, who became the most horrific serial killer ever known. The demons rising within him threaten to undermine decades of exhausting work that liberated him from desperate poverty and positioned him to be an excellent surgeon before he turned killer.

Eliot Ness kept the identity of his most horrifying suspect secret for almost four decades until Marilyn J. Bardsley discovered the name. These are her fictional portrayal of the killer’s thoughts and actions, based on interviews with his friends and relatives, the detectives who investigated him, and people close to Eliot Ness.

Marilyn J. Bardsley’s “After Midnight in the Garden of Good and Evil” was Number 1 on the Wall Street Journal Bestselling Nonfiction Books list. She created and managed Time Warner’s Crime Library, the premier crime website on the Net, for more than a decade. As the founder of Crimescape.com, she has brought 21 true crime books to the marketplace.

Available for free from Instafreebie