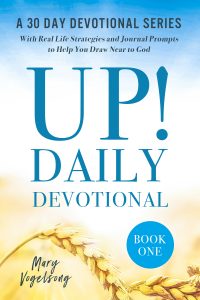 You can draw near to God, and you don’t have to put it off any longer!
This short devotional will help you identify why the things you have been so proud of may actually be worthless. It will show you the surprising fact that striving to please God brings you no closer to Him!
Most importantly, you will learn the true way to draw near to God!
Mary Vogelsong began writing devotionals for her church bulletin. That became the basis for her debut book, a Christian daily devotional based on the word, “UP!” But this book isn’t just for Christians. It’s for anyone who wants to draw near to God by taking a quick look at various Biblical concepts.

Each daily devotional begins with an anecdote that ties into a scripture passage with a brief explanation, real life strategies, and journal prompts to make the day’s thought more personal to the reader. 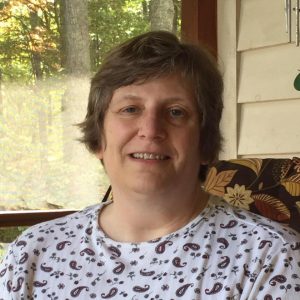 Mary Vogelsong first began writing devotionals for her church bulletin. They were so well received that Mary became a regular contributor. As she began to field suggestions that she write a book, a long held dream of writing full time was reawakened. Now Mary is living the dream! Besides Christian nonfiction, Mary also writes biographies and other nonfiction, and about medical issues. Based in the mountains of Virginia, Mary enjoys reading, fly fishing, and crafting jewelry from natural stone. She and her husband David have been married over 30 years are the parents of three adult children.