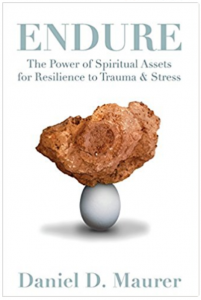 Real stories of resilience told by real people demonstrate how spirituality makes a difference when it comes to a person’s ability to bounce back after trauma or stress. What do a Syrian refugee fleeing his homeland, a woman who suffered a machete attack by her husband, a US soldier afflicted by war, a pastor whose church was burned to the ground by a serial arsonist, a mother who lost her son to heroin addiction, and a woman whose sister was killed by a serial killer all have in common? Trauma, stress, and how they found the spiritual tools to endure and overcome staggering odds.

Transformation guru and award-winning author & journalist Daniel D. Maurer (Sobriety: A Graphic Novel, Faraway: A Suburban Boy’s Story as a Victim of Sex Trafficking, and Papa Luther) shares—in each person’s own words—that spiritual beliefs are more than fluffy, “nice things” to believe in. Instead, spiritual assets become the transforming spark that undergirds a resilient response in many life situations, even yours.

Publisher’s Weekly says of Endure: “Maurer has a gift for shaping the stories, which are presented in first person…His pastoral insight is the book’s strength and will enhance its appeal to readers looking for stories of people who have come through the pain of substance abuse and mental illness to find health and peace.”

Michael H Ballard, the Founder of Resiliency for Life says: “Such meaningful and useful content on being resilient. When you add in the power of individual stories for perspective and the courage of the author to share his missteps and mistakes, trials and tribulations and lessons learned, it makes this book well worth reading. I find it inspiring and highly recommend it for anyone feeling stuck and trying to move forward, or for anyone who wants to support a loved one, a team member or coworker who is being challenged by life’s BIG Stuff and so often threatening events.”

Dr. Ann Masten, the Regents Professor of Child Development, University of Minnesota, and author of “Ordinary Magic: Resilience in Development” says: “This book’s stories illuminate the complexity of human lives, both in regard to the vicissitudes of life and the diverse and sometimes surprising paths to well-being. This book offers rich insights for those facing similar challenges and those who care about them, as well as professionals and scientists seeking to understand and promote resilience.”

Audrey Mabrey, an internationally acclaimed domestic violence advocate, speaker, survivor and President of Break the Silence against Domestic Violence, states: “Maurer’s vision and expression of the power of spiritual assets was eloquently captivating and highlighted so beautifully how we can all tap into this natural resource as a means to accomplishing true resiliency.”

Daniel D. Maurer is a freelance writer and openly lives in recovery in Saint Paul, Minnesota. His current books include “Sobriety: A Graphic Novel” and “Faraway: A Suburban Boy’s Story as a Victim of Sex Trafficking” (co-written with R.K. Kline). Dan enjoys spending time with his two boys and wife, Carol. He plays the Great Highland Bagpipes and also makes a mean latté … although not at the same time. His non-fiction writing focuses on stories of transformation and how anyone’s story is never yet finished, even in times of great struggle.