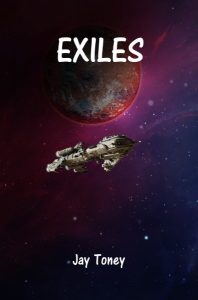 Captain Roberts and his crew are at the end of their resources. The Alliance have confiscated everything of value and conscripted most of his crew. They are being taxed again. There is no way he and his crew could make enough credits to satisfy the Alliance, and they know it. They are watching him, making sure he can’t escape. The next time the Alliance boards his ship will be his last. He needs to find a way to escape the Alliance, and cross the border into the Collation of Free Worlds.
He and his crew would become exiles. It didn’t matter. He had no intention of returning to Alliance territory. It was up to Nathaniel Roberts to restore their family wealth and get revenge against the Alliance for what they did to his friends and family.
Captain Roberts was unaware that the Alliance was breaking a century-old treaty in preparation for war. The Alliance wasn’t alone; they formed a pact with the Crimson Tide, a pirate organization. Captain Roberts wouldn’t be facing one enemy; he would be facing two. He would have to fight both of them while trying to make a new home for his crew.

I got hooked on reading early in life, reading nearly everything I could get my hands on including the Encyclopedia Britannica. As well as being an avid reader I enjoyed bicycling, skateboarding, fishing, and building models and puzzles. As far back as I can remember, I loved anything to do with aircraft. I joined the USAF as an aircraft mechanic working on the F-4, T-38, F-117. and the F-16. A knee injury stopped me from working on aircraft. My knee couldn’t support me on the odd angles and slick surfaces. While in the USAF I attended college. My second love was tormenting my English teacher. I found out she had a fear of death, then she was at my mercy. Anything she said not to do I did just to show her I could. Every essay or theme I wrote dealt with the topic of death, from the first-person perspective of a person undergoing an autopsy, being buried alive, and rising from the grave. She was glad when I graduated. Some authors who inspired me are Robert Heinlein, Harry Harrison, Alan Dean Foster, Piers Anthony, and much more.