What is a single life worth? In our modern world, where wars are on the cusp of igniting at a moment’s notice, new diseases ravage entire populations, and hidden atrocities erase the lives of thousands, what can the death of a single person mean?

It can mean the tenuous line between peace and destruction.

Kurt Ramis knows this, as he watches the aftermath of an assassination on his television set. His years in the CIA have prepared him for such a dreadful day.

“Rasul” knows this, and he follows his young guide down the streets of New York City, with a gift for his adopted country.

The soldiers and sentries of Camelot’s Corridor, deep under the sands of Texas know this, as they prepare the secret bunker for the President’s arrival.

Mike Keogh knows this, as he remembers fallen friends, betrayals, and mention of a secretive monster named the Tangerine Demon.

Jessie Rosen will know it soon enough, as she descends the steps to Kubrá, to meet her deliverer. Her new family descends those steps as well, calling for their Lord to hear their prayers.

Phil Barr begrudgingly knows this, as he cowers in his palatial Hollywood Hills mansion, murderers and thugs auditioning on live TV, sirens ringing in his ears. This wasn’t how his charmed life was supposed to turn out.

And DaRWIn knows this best of all, as it predicted the assassination, and the calamitous after-effects some time ago.

On a certain day, on a certain street in the Middle East, the taking of a single life will mean everything, and it will shake the foundation of humanity. It will be the pulling of a loose strand in mankind’s tapestry, undoing the progress of a thousand years, ripping apart at the seams countless lives, countless societies.

Intertwining lives and stories, some saved and some ended, some Going, some Gone… 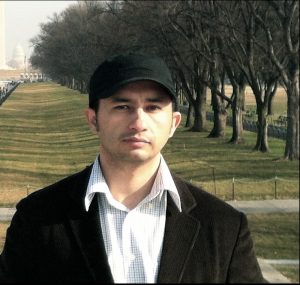 Abraham spent his formative years in rural Colorado, where he was born. He has also lived in Northern Nevada, Virginia, and Northwest Arkansas. These disparate environments and local cultures have had a great impact on Abraham’s view of America and his writing styles. Though educated as a computer programmer, Abraham hopes to be a full-time writer in the near future.