The aging cyborg had never really recovered from being betrayed and enslaved by his superiors in the Army, and the final insult of being permanently classified as “defunct military ordnance” had been a bitter pill to swallow. Now, he spent most of his time drinking beer and working as a fixer for the crime families in 25th-century Boston. It was easy money if you were the kind of guy who was bullet-proof and could pick up a house.

But then Lucia Ribiero stumbled into his favorite watering hole dragging a squad of bounty hunters behind her. Shadows from his own dark past, and old debts still unpaid conspired to drive the old war-horse out for one more mission. Like any good soldier, the mission is all that matters for Roland.

Linked by a shared connection to her kidnapped father, the duo will face veritable armies of criminals, mutants, cyborgs, and corporate executives as they search for the missing man. The secrets of the Ribiero family are exposed as they approach the center of the labyrinth, and Lucia’s mental and physical issues present an even deeper mystery than her father’s disappearance.

Roland will have to face the horror of his past one more time, and Lucia will need to get a grip on her future if they expect to survive a running battle with an entire galaxy’s worth of mad science gone awry; and ultimately prevent a terrible history from repeating itself. 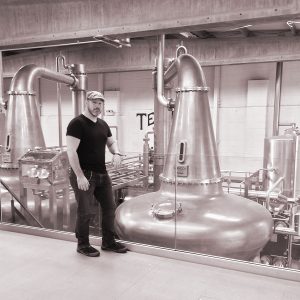 Andrew Vaillencourt would like you to believe he is a writer. But that is probably not the best place to start. He is a former MMA competitor, bouncer, gym teacher, exotic dancer wrangler, and engineer.

He wrote his first novel, ‘Ordnance,’ on a dare from his father and has no intention of stopping now. Drawing on far too many bad influences including comic books, action movies, pulp sci-fi and his own upbringing as one of twelve children, Andrew is committed to filling the heads of readers with hard-boiled action and vivid worlds in which to set it. His work pulls characters and voices born from his time throwing drunks out of a KC biker bar, fighting in the Midwest amateur MMA circuit, or teaching kindergarteners how to do a proper push-up.

He currently lives in Connecticut with his lovely wife, three decent children, and a very lazy ball python named Max.